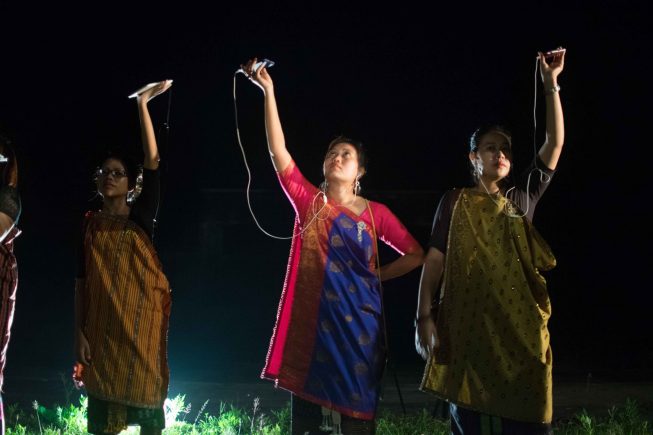 Can art + technology connect people for real and build intercontinental communities? The summer of 2017 a dream came true. A temporal window between Berlin and a remote corner of the world – Diphu in Assam (the site of Erika’s fieldwork) was opened as a part of Berliner Festspiele‘s Immersion programme series – Limits of Knowing. What made this project possible was Lundahl & Seitl’s ground breaking artistic research project Unknown Cloud. Below you can almost experience the event:

You can also read about the experience in the Medium article: Who Said VR Has To Be Visual? – An innovative art project uses experiential audio to create a true sense of togetherness, written by one of the talented participants Alejandro Subiotto Marqués. Unknown Cloud was also featured in Kobra, a Swedish television programme with fascinating interviews and reportage about culture.

The aim of the collaboration between Curiosity Shop and the visionary artist couple Lundahl & Seitl is to approach social and elusive phenomena such as empathy and trust from both a social-scientific and artistic perspective. Erika has been following this interactive work of art, and is together with the artists working out methods to explore if and how the project can affect the ability to trust and increase the empathy of the participants.

“If nationalism can arouse deep attachment, can a hyperreal nomadic imagined community do so too? With modern day tech-alchemy it is possible to induce a feeling of being part of something greater and to charge human encounters with high emotional arousal in order to overcome differences in a dreamlike but yet ‘real’ state. Welcome to the edge of the limits of rational knowledge, or what philosophers, since Aristotle, have variously called Agnoseology – the theory of unknowability”.

Quote from the Berliner Festspiele’s blog about the artwork, written by Erika Tanos (also an article published in the German newspaper Tagesspiegel.